A KID FROM CONEY ISLAND 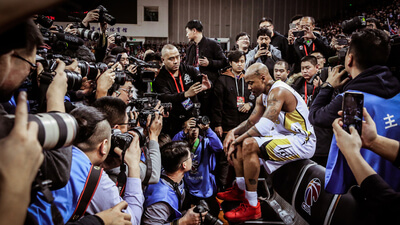 DIRECTORS STATEMENT:
Coney Island, New York is famous for a few things: Nathan’s Hot Dogs, Spike Lee’s He Got Game, and a kid from the housing projects named Stephon Marbury. A boy, who at the ripe age of 5, was told that he was going to the NBA. He had the weight of the world on his shoulders given that his three older brothers, who were elite basketball players in college, never made pro. For Stephon, there was no choice, but to redeem his family name and build a legacy in the sport of basketball, globally, but not without its downfalls…

After our first documentary Benji premiered as the Gala Film at the 2012 Tribeca Film Festival, then worldwide on ESPN, a ton of producers and athletes started to approach us about doing their sports documentaries. So, when Jason Samuels called about directing Stephon Marbury’s story, we were hesitant. We had the same misconceptions about Stephon that the media created before he left the NBA and went to play ball in China. It wasn’t until Jason said that Nina Yang Bongiovi was producing that we were interested. We felt that she really understood filmmaking and admired how she and her producing partner, Forest Whitaker, took risks on first- time directors like Ryan Coogler and Boots Riley. We knew that if they were involved, there had to be an amazing story ahead of us. After meeting Nina and then Stephon, who shared the same ideas about life and religion that we had, we felt we had to be a part of this team.

A Kid From Coney Island is the story of Stephon Marbury and how he started as a promising athlete from the projects, pressured to be great, and became an NBA star. Fame, death and depression lead Stephon to a place on the other side of the world that accepted and humbled him.

In the early 2000s, Coodie started documenting an up-and-coming music producer and rapper named Kanye West. While producing a segment on Kanye for MTV News, Coodie met his directing partner, New Orleans native Chike Ozah. Chike had worked at MTV as a motion graphics designer after graduating from Savannah College of Art and Design.

In setting their sights beyond music videos, Coodie & Chike formed their own production company, Creative Control, and in 2009, they launched the digital network, Creative Control TV. Since then, Coodie & Chike have produced and directed several award-winning documentaries and narrative films, including the critically acclaimed ESPN 30 for 30 documentary “Benji,” which premiered at the 2012 Tribeca Film Festival, and the BET documentary “Muhammad Ali: The People’s Champ,” which won a 2016 NAACP Image Award for best television documentary. Most recently, Coodie & Chike executive produced and directed the original documentary “Martin: the Legacy of a King,” which premiered on BET in January 2019.